The first of the recipes from my festive menu is the cheese terrine we had as a starter with Peters Yard crispbreads and a selection of smoked and cured salmon from Forman’s. 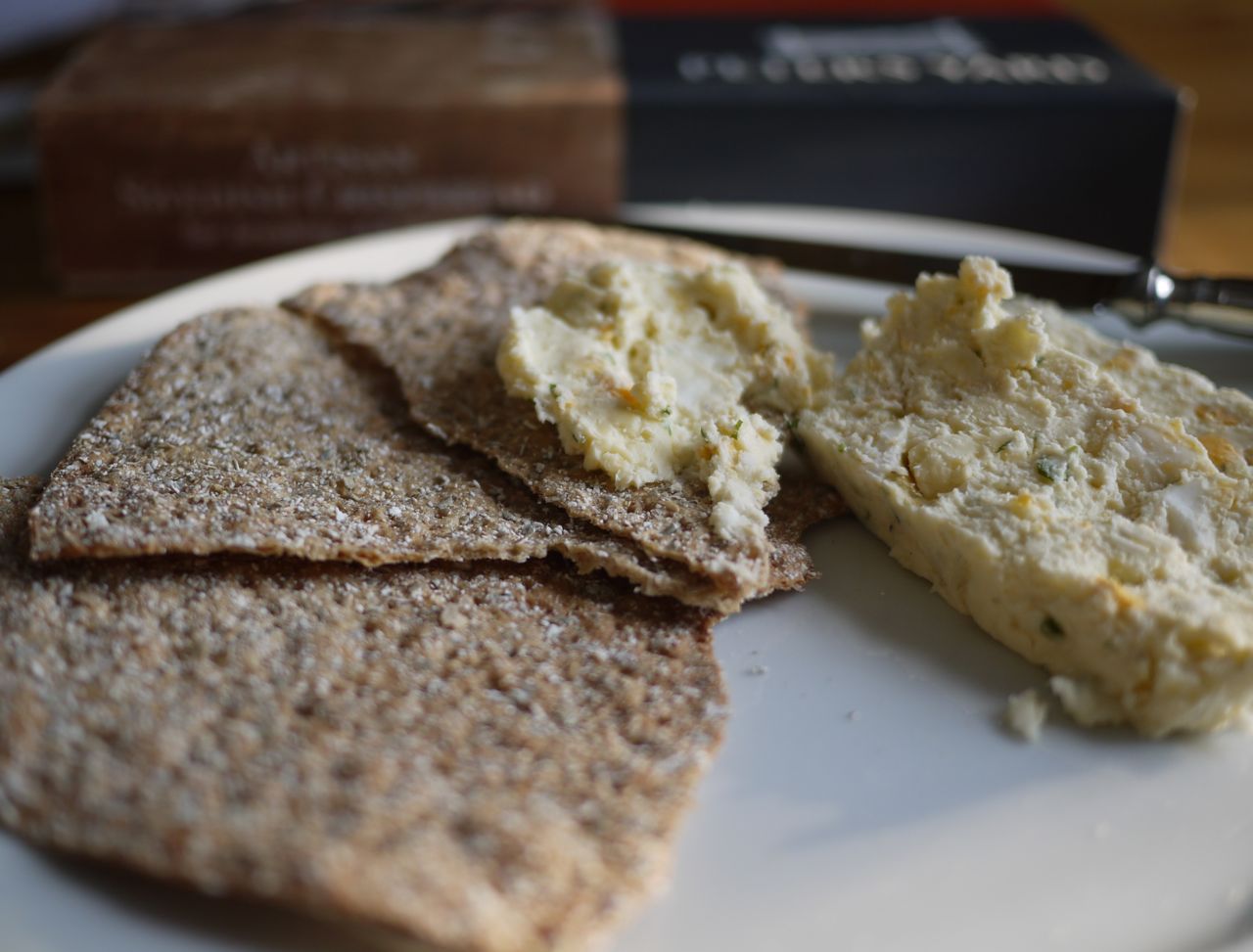 The terrine is adapted from a recipe in Delia Smith’s Christmas (the old version I’ve no idea if its in the recently published version). I particularly wanted to use a range of Lancashire cheeses but you could use any mix of cheeses you have and it would be a good way to use up what’s left of a cheese board. It makes a good starter or a light lunch dish (which is what I’ve been doing with the leftovers).

Dissolve the gelatine as per the packet instructions. Blend the cottage/curd cheese with the mayonnaise/yoghurt until smooth. Cube the hard cheeses into 1/2 cm pieces. Whip the cream to the floppy stage.

Add the dissolved gelatine to  the soft cheese mixture and stir thoroughly. Add the hard cheeses, herbs, salt and pepper and mix. Then add the cream and stir through. Pour or spoon into the terrine mould. Cover with cling film and leave to set for 3 hours or more in the fridge. Turn out onto a plate and serve in slices or allow people to help themselves.

Enough for 8 as a starter.

After enjoying the ‘In the Bag’ challenge so much I thought it would be good to join in another blog event. I spotted the ‘No croutons required’ event over at Tinned Tomatoes run by Holler.

One of the things I’m finding so great about food blogging is checking out the other food blogs and from that getting the grey cells moving to come up with new ideas or remember forgotten favourites. Suddenly lots of ideas come together and you want to try something different.

This months ‘No croutons required’ has an extra twist – its been Holler’s birthday and so along with the soup or salad (based on tomatoes this month) we also have to come up with a birthday dinner menu for Holler – fortunately we don’t have to cook and test the whole lot together – though I’m thinking it might be wise to at least have tried the rest of the menu before?

This is (very) loosely based on the Tuscan soup Pappa al Pomodoro.

First some tips and WARNINGS!

We are actually going to be smoking the tomatoes with a smoking mix of rice/tea/sugar so if you don’t like smokey foods forget it now. If you’d like to go an adventure with me hop on and keep reading.

Once the smoking thing gets going it really does make the house smell, well pretty smokey, so ideally do this in the garden, on a camping stove, on the gas ring of your fancy barbeque any heat source you can find. If not open all the windows, shut internal doors, put the extractor on max and hope for the best.

The smoke, as well as creating tasty smoked tomatoes, will get all over the pan/steamer you use so don’t use your best/favourite pan as its takes a lot of effort to clean up. Use a non-stick wok if you can and one of those cheap(ish) bamboo steamers. If you have a smoker use it (not them).

If you don’t like smokey or chargrilled foods you won’t like this – stop now make something else.

Be careful where you put the steamer down post smoking; don’t make an impossible to remove mark on your new work surface like I once did ?

Ingredients (for the smoking bit):

½ cup rice – don’t worry what type – I used basmati
¼ cup tea – whatever you fancy, the stronger the tea the stronger the flavour – I used Darjeeling
2 tbsp soft brown sugar (I think its this that makes a lot of the mess)
6-8 ripe tomatoes – medium size

the smoked tomatoes (as above) – use as few as or as many as you like to adjust the smokiness of the soup
1 tin chopped tomatoes
1 clove garlic, finely chopped
olive oil
1 pint vegetable stock (made with bouillon powder is fine)
4oz dried pasta, either small soup pasta, or whatever you have broken into smaller bits (I used linguine snapped into smaller lengths)
2 sprigs fresh rosemary

And the taste – well it was pretty smokey. I liked it but Ian wasn’t convinced (which is odd because he’s usually a fan of smoked foods). I think if I did it again I’d smoke the tomatoes for less time, maybe use a very subtle tea – although Darjeeling isn’t usually though of as a strong tea the flavour after 10 minutes of smoking its pretty intense, and perhaps use fewer of the smoked tomatoes saving the others to make a bruschetta or toss in a salad.

As for the rest of the menu….

Chick pea pancakes with wilted greens and fresh soft cheese: I’d use the recipe in my Spicy chickpea pancakes post but omit the chilli, ginger and cumin seeds and add lots of fresh chopped flat leaf parsley instead. I’d wilt a mix of the nicest looking greens I could find probably spinach, kale and wild garlic for preference, pile these on the pancakes and add some lovely fresh soft cheese cut into slices (ideally I’d get some Stichill or Crowdie but any nice goats cheese would also work well) and then fold the pancakes in half and serve with some steamed leaks and purple sprouting broccoli.

For desert there’d be my Rhubarb and pink ginger ice cream, with a dash of stewed rhubarb and a little cream poured over so it freezes on the ice cream in the way I loved so much as a kid.
UPDATE (1/5/09):
I’m thrilled to say that I WON April’s ‘No Croutons Required’. I don’t usually win stuff so I’m quite excited and am going to be proudly displaying the winners badge in my sidebar

Thanks to all who voted, and for all the comments.