And can Karen cook asparagus tart?

It’s a kind of recipes at dawn this, Chile Verde vs. asparagus tart, one blogger pitched against another. Masterchef without the cameras, or the publicity, or the random commentary, or the…….well almost any of it. Just a bit of fun.

You might remember back in early May I was ‘adopted’ by Karen over at ‘Karen Cooks’. We did a blogo-interview of each other to introduce our very different worlds and in the meantime I’ve been asking Karen lots of questions about food and blogging and incorporating things I’m learning into my blog. Anyway, we thought it might be fun to have a cook-off: each pick a recipe from the others blog that would be a bit challenging and new and then cook and blog it. We agreed that we mustn’t pick something too easy but also we aren’t to email back and forth to ask for guidance if we get stuck, we’ve got to make our own judgements on how to substitute things. No winner, no loser just some fun.

But as soon as you start to think about it there’s lots of hurdles and tests.

Some hurdles, © cxvalentina – Fotolia.com
Can you get all the ingredients? On the face of it I might have an advantage here: I’m in London, population 7.55M, over 300 languages spoken and with 40% of the population from a non British background there’s a huge variety of influences and lots of shops selling all sorts of things from around the world (hopefully Chile Verde ingredients!). Karen meantime is in Havre, Montana, population just under 10,000 so maybe the food supplies will be more limited, or maybe not. I can see she’s tried lutefisk at the local church dinner so they aren’t short on interesting dishes/ingredients. Havre, Montana (copyright Karen)
Do you even have an idea what the dish should taste like? Um no, in my case I don’t. I’ve picked it because Karen describes it as her second favourite Mexican dish ever and also she says that it’s so good you’ll taste it and think you’ve gone to heaven (well in fact the Imperial Valley in Southern California). Actually, come to think of it, I don’t even know anything about the Imperial Valley so how do I know I want to be transported there…..
And can you actually follow some one else’s instructions? Especially if you have to start to free form if you can’t find all the ingredients….
We’ll see, let the cook off commence!
Right to cook my recipe I need: So next it’s onto the internet to find out where to get my mitts on tomatillos and green chiles. A bit of rummaging tells me that green chiles are Anaheim chiles and you can get them fresh and canned, well you can, but there’s no fresh ones right now in the UK as its too early in the season. And cans don’t seem to be that easy to come by either. Ok so lets look for tomatillos. Again you can get them fresh but its way too early, they won’t be ready until at least late June and we’ve set a deadline of 16 June to post. There’s tins as well and I find that Cool Chile Co stock these and they have a stall at Borough Market – great its been ages since I’ve done a trip to Borough so that’ll be some fun AND I can go via there on my way to meet a friend for lunch AND Cool Chile do corn tortillas so I can pick up some of those.

Close to be being sorted I sit back and relax and do other stuff. How foolish of me!
On my next trip to the supermarket I check for fresh jalapenos and also look, in the somewhat small Mexican section, for green chiles. None of the latter and no fresh jalapenos either – had I imagined them in the past? There’s sliced pickled ones mind, so I might have to substitute with them.
But its okay. I’m going to Cool Chile at Borough market on 11 June and I’ll be able to make up lost ground. Yes. Well. That would be the case if the lovely RMT didn’t decide to call a 48 hour tube strike meaning its madness to go into central London unless you have to – is a can of tomatillos a ‘have to’ trip? Probably not, and as I’m in London on Friday (and the strike will be over) I might be able to pop by Borough then. No wrong again. I have to be somewhere before Borough opens (why does it only open at midday!) and there’s not going to be time to get there afterwards.
It’s getting rather close to the deadline.
Of course Borough is open on a Saturday but I’ve heard its mad busy and packed with people ambling and not buying, and I won’t even be able to do a smash and grab style shop as I don’t actually know where the stall is within the market. Although there’s a map its not that easy to read without a portable electron microscope……
In a bit of a panic I do some extra research on Karen’s site and come up with an alternative choice of Portuguese Chicken and Rice, only then I find this needs Old Bay Seasoning – okay like I’m not going to get that in time but I do find a couple of mix your own recipes if all else fails.
My husband is now set on the idea of Chile Verde, however, and shuffles our Saturday plan around then packs me off to Borough to try to get tomatillos. Tower Bridge, London, copyright Geoffrey Metais, from Fotolia
The tube journey is amazingly fast for once and from Monument it’s just a walk over London Bridge. Well just a walk through the thronging crowds of Euro tourists admiring Tower Bridge who’ve presumably come to take advantage of the exchange rate (and not just the views). I’m glad they are helping the battered British economy (and boy does it need some help right now) and they all seem to be having a lovely time in the sun admiring the views up and down the Thames, but I’d kind of prefer it they were splashing their Euros just slightly off my direct route to tomatillo buying. You can’t have it all ways so I do my helpful deed of the day when a couple of Irish lads ask if they are near Oxford Street and, having broken the bad news that they are way off target, I point them back in the right direction (like back on to the tube with very specific instructions).

Eventually I get to the market and plunge in through the nearest entrance, which, somewhat amazingly, brings me in pretty close to Cool Chile, and woo hoo they have tinned tomatillos. Ah, on closer inspection they prove to be giant catering tins containing 2.9kg (6lb 6oz) of whole tomatillos! Um, that’s a few more than I need. The lady says nope there are no smaller tins, they used to get them but can’t seem to anymore, they freeze well though. Right. I’ve never tasted them. I might not like them. I’ll have enough to feed a Mexican family for, well who knows how long. After some discussion we agree that I will cheat using the tomatillo salsa, it’s a normal size jar, its got a few other things in it, but it makes more sense and I won’t end up with stretched arms carrying it home.

I also find that they don’t do tinned green chiles but I am able to get the tortillas and some whole pickled jalapenos. Mission kind of accomplished I decide it’ll be nice to wander round the rest of the market and may be have a coffee from the wonderful Monmouth Coffee Store. About 2 seconds later I realise it can only have been the high of finding something that is vaguely tomatillo-y that made me think this. This market is PACKED with people ambling so slowly they are almost in reverse and there’s a queue at Monmouth coffee that is frankly, even if this ranks as one of London’s best coffees (and it does), more than any sane person could take. I make my exit and tube it home to a coffee there.
Next stop is the supermarket and pork shoulder; drat all the pieces are rolled and ready stuffed, Sunday roast style, with apple and sage – how annoying! I spy some cut as kind of chops with no extra adornments and get those, another search (thats 3 laps of the relevant sections) but no green chiles to be found at all so I go for green bell peppers and I’ll load the jalapenos a bit to balance things out. I spy a bottle of Mexican red wine (!) and decide that will be fun (or hangover material) and grab some of that.
Back home it’s time to get a move on and start cooking.

I’ve got 750g of meat (so 1/3 of Karen’s recipe). It’s hard to tell from her measures how much 10 tomatillos is so I just decide to use all the jar of salsa, 3 green peppers, 1.5 jalapenos, 3 cloves of garlic, half a small onion and 1 chicken bouillon square which I whizz together in the food processor to make the sauce. I cube the pork and cook it in oil to seal it (I do it in two batches, its easier) then in goes the sauce, stir it all round, bring it to the boil, turn down and simmer for four hours. Right now its just coming up to the 2 hour mark….so I’ll be back in while to tell you about progress.

With 30 minutes to go I’ve popped in the rest of the onion and the chopped up tortilla. I’m musing on what accompaniments to serve. The smell is pretty good so I’m hopeful it’s going to be a hit of a dish.

We served it with rice, guacamole, tomato salsa and refried beans – who knows whether that’s what you have it with but that’s what we chose. 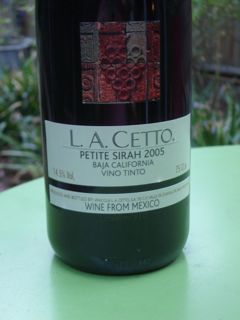 AND THE VERDICT?
It was fairly hot, but I’m a bit of a chile wimp. I thought it was going to build up to something that had me mopping by brow with a tea towel but it didn’t, staying tingly but with the tartness of the sauce cutting through the heat to make it a really refreshing dish. The Mexican wine was pretty good too, big flavours and fruity.

So overall a 9/10. It was delicious ? and in fact I’m regretting not getting the catering can of tomatillos after all because this is a definite big addition to my cooking.

Wonder how Karen’s doing with the asparagus tart…..