Here’s eric kitten sprawled out in a shaft of sunlight basking…. 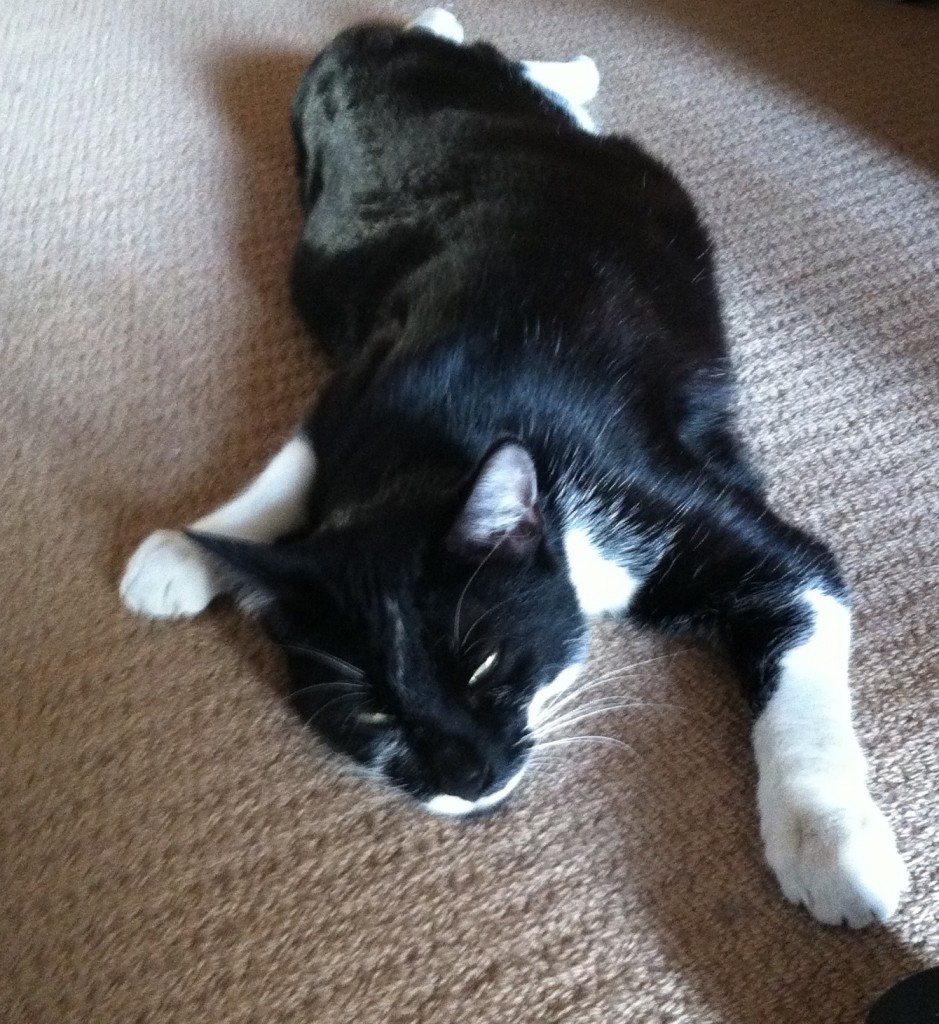 Now we have Franci kitten looking deep in thought.

One show off kitten, one pensive kitten!

I think Eric kitten is practising to be some kind of film star….

This is my lovely fireplace after being kitten proofed this morning.

Eric kitten decided that a mountaineering adventure up the chimney was in order.

I caught him just before he disappeared.

I now I have this to look…lets hope the kittens calm down soon.

Just over two weeks ago we finally decided it was time to get some kittens as companions for Fred cat (and us of course) as Fred cat has been a bit sad since Daisy cat died.

So I looked up the local rescue centre (I also looked on things like GumTree and local papers) but decided I wanted my money to go to someone who was doing good work rehoming cats. I found the nearest rescue centre was The Celia Hammond Animal Trust at Canning Town. After admiring lots of cats and kittens in need of loving homes on their website I sent them an email and they popped round to to see me and find out which cats or kittens might be suitable for us and our house.

There was two litters of kittens by sister cats just ready to go to new homes in pairs so we went and met them at their foster house and picked the two who seemed most friendly with us. They turned out to be one from each litter so they are cousins I suppose.

We collected them last Friday and settled them into their ‘playroom’ (aka the spare room kitten proofed).

Fred cat has met them a couple of times but he’s a bit wary and bemused so far.

They of course are running round in excitement, play fighting, eating lots and sleeping.

The black and white is a boy and the white/tabby/ginger a girl. Its a condition of rehoming them that they both get micro chipped and neutered in a few months. Why? Well the cat population is huge and unneutered tom cats are the largest cause of the spread of FIV (cat HIV) through bites when fighting or mating. And I’m happy with that because Daisy cat was FIV+ from a bite from an unneutered tom cat and in her case its seems it turned into full blown cat AIDS meaning she died at the young age of 8 and was very sick in her last few months (it is actually rare for it to be that bad but it does happen).

NB (added after posting): cats cannot pass FIV to humans so there is no risk to you in homing an FIV cat its also rare for them to pass it to other cats apart from through unneutered toms fighting and mating. It’s the biting that is the main way it gets transferred (male cats hold female cats on the back of the neck when mating and often bite them in the process).

Oh and names. Well it took ages. But….

And meet Franci (pronounced with a hard c like a k):