It was the first day of spring on Saturday and the weather ran exactly to form – sunny and warm but with a slight bite to the wind. We all wanted something for lunch that fitted in with the weather – salad would perhaps be too summery and at first we though that soup would be too hearty. What we needed was something that was fresh enough to keep the mood of spring and summer to come but warming enough to take the edge off that wind. 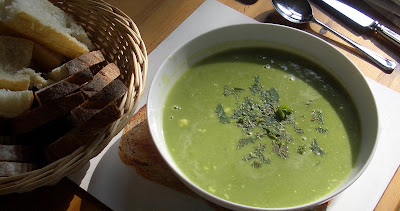 After some time spent flipping through cookery books I found a recipe for pea soup that seemed to fit the bill. Now of course peas aren’t in season right now (and I’ve been working hard at cooking more seasonally of late) but in fact most of us never actually get to have really truly fresh peas straight from the plant, out of the pod and into the pot (or our mouth). Unless you grow your own peas, or know of an excellent source where you can be sure you will get the peas the same day as they were picked, then its very likely the case that the best tasting peas you’ll eat at home will be ones from the freezer. The frozen pea is actually pretty good, its well known that the time from picking to packing is very short and this preserves the sweetness (according to Bird’s Eye field to frozen is 2 ½ hours), and you can now get organic grown frozen peas to lessen the guilt of not buying fresh!

So we settled on pea soup. The recipe comes from a book called ‘The Little Book of Soup’ and was contributed by Gary Rhodes (it’s a nice little book and I’ve cooked a number of soups from it adapting as I go. It also supports homeless charities through donating 70% of proceeds). The recipe in the book suggests it feeds 4 as a generous starter but as we had 4 and this was our main dish for lunch I roughly doubled up the quantities (I didn’t actually have enough frozen peas to do double so I guess the original might be thicker in texture). Below I’ve listed the quantities I actually used and in brackets those quoted in the recipe:

1 litre of chicken stock (600ml water or stock)) – in my opinion stock is always a better base for soup as it gives an added dimension that helps lift the flavour up a level – but as you can see Gary suggests water and since he’s a Michelin starred chef and I’m not we have to grant that he might know a thing or two about making soup.
750g frozen peas (450g podded fresh peas or frozen)
salt and pepper
pinch caster sugar
2 desert spoonfuls of Greek yoghurt (100ml whipping or single cream)

The method is pretty easy you basically bring the stock to the boil add the peas bring back to the boil and simmer for 5 minutes until the peas are tender. Then you add the seasonings of salt, pepper and sugar and liquidise/blend the whole lot with whatever kitchen implement you have to hand for that purpose. Gary suggests you could push it through a sieve to get a really smooth finish and I imagine for a dinner party this might be worth the effort but for a quick light lunch with friends I’d say it’s overkill and time ill spent. Put it back in the pan and warm through adding the yoghurt or cream (or crème fraiche would also work well) just before serving. We garnished it with some fresh chopped mint leaves or for a more wintery take you could try crispy lardons or strips of salami.

Taste wise it was just what we had hoped for, fresh flavours with depth from the stock and just enough soupy warmth to make it a great dish for the start of spring.