About a month ago I was contacted by the PR firm for Abel & Cole asking if I’d like to try one of their veg boxes for free, well in exchange for doing a review of it on my blog, after all nothing is truly free; although I figured they’d have a hard time trying to enforce the contract if I just scoffed the food then did nothing.

Legal matters aside there was, of course, the issue of whether to accept a freebie and whether you can write an objective review of something you didn’t pay for. In actual fact can you write an objective review, full stop, whether you paid for something or got it free? As anyone who has spent more than five minutes reading up on social science concepts well knows, along with there being no such thing as a free lunch, there is no such thing as an objective (re)view. The best we can hope for is that people openly state their position and try to balance both sides of any debate. 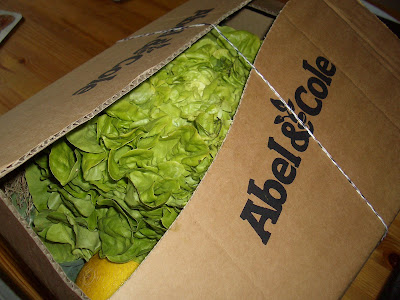 So in the spirit of this here is my position:
I’m female, white, middleclass, over 35, married, management job blah blah blah. In fact how come I’ve not been buying Abel & Cole every week since they started I must be in their core demographic? Well that’s because although I’m keen on organic and local and stuff like that I also like shopping (some might say rather too much), so the idea of a box with my weekly food shop in just turning up on the doorstep has never quite worked as a concept for me. I’ve toyed with the idea a lot on and off, looked stuff up on the web, found different schemes, been tempted by recent money off ‘junk-mail’ offers from both A&C and Riverford but never taken the plunge.
But now I was being offered the chance to try it for free! So of course I said yes.

Now before we continue lets just be clear here that Abel & Cole have approached quite a number of bloggers with the same offer and many have said yes. It’s fuelled an existing debate about freebies and ‘bloggers as reviewers’ that I’m not going to expand on here (suffice to say mud was thrown along with the term ‘blaggers’). I think that as long as people are clear that something was free, that it fits with what they normally blog about and that they try their best to be objective then readers can judge for themselves – and I’m sure the readers do. Its also means that there been plenty said already so I’d suggest you go and look at the other reviews as well – I’ve listed some at the end.

THIS IS JUST MY OPINION BASED ON A SAMPLE OF ONE

What then was my experience of the box scheme. I guess it can be summed up in one word: 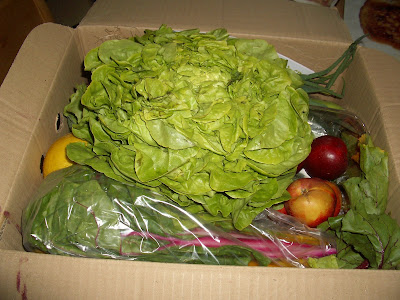 Look at the size of that lettuce!
Why? Well let’s go through and score the whole thing on some measures (not out of ten but as YES or NO or INDIFFERENT):

I didn’t use the online system but just took the standard box. I’ve looked at the online system since and it looks ok but no better or worse than similar offerings. So no real advantage here but some sites are far worse.

A big fat NO in fact. They tell you what day they deliver to your area and it could be at anytime of day. Where I live it’s a Thursday but pity the people who are on a Monday. I’m not at all keen on the goods turning up when it suits their schedule. On this occasion they turned up before I went out for the day but I wasn’t pleased to find a whole box of veg on the doorstep at 7am when I was about to leave for a meeting that I then had to divert my attention to and deal with (the veg not the meeting). I’m also not that thrilled with the idea of it sitting on the doorstep all day – the only place they can put it being in the recycling bins! So this doesn’t work for me. I’ve used Ocado quite a bit (I’ll come onto whether its for comparable things) and you select your day and time down to an hour. The price varies accordingly but in this case you get what you pay for. With A&C its 99p for it to turn up when it suits them and for Ocado it can be as much as £6 to have it turn up when suits you. I guess it depends on how much you value the ability to say when you want it delivered. For me this is one of the biggest losing points.

It looked like you got a lot of stuff in the box and for 2 people (it was a medium box) it was certainly plenty for a week. 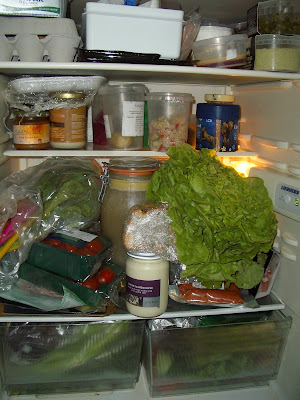 Hmmm its a bit of a squeeze in here
Variety = NO

The medium box is billed as for 2-3 people and although there was lots of quantity there was less in the name of variety which would mean you might get bored before the week was out or you could end up wasting stuff or you’d still need to go and buy more stuff e.g. there was lettuce and spring onions but no other salad stuff. You can of course substitute things or add extras.

Sorry call me pernickety I but expect 100% accuracy when the contents are only listed on the site 2 weeks in advance of delivery. I was so looking forward to little gem lettuce but that’s not what I got. Irritating. With Ocado (and others) you can at least decline the substitution.

I have to give it this because you should not be able to suggest the box is seasonal when it contains APPLES. They are not in season in the UK so must have been shipped half way round the world. Now of course in winter this could lead to a box full of turnip week in week out but considering this was late June there must have been something more local and seasonal than apples from the Southern hemisphere. I don’t think that something that is so good in the UK when its in season should be put in the box out of season. Things we can’t grow here might be a different matter but things we can and in fact we are good at should be optional extras for those who want them not standard items. Imagine what I’d have to say if they sent me asparagus in February…..

There is no indication on the produce or the receipt where the items have come from (except I’m hoping the Jersey Royals came from Jersey). In the supermarket it either states the country or in the case of much UK produce the county and even the farmer it’s from. The farm shop can and does do the same. Come on A&C this isn’t good enough. On the website it supposed to show what is local (for which I read UK generally rather than local to me specifically as I understand much of the stuff is from the South West) but it should also be clear on the receipt, and be more specific.

The apples were woolly and tasteless, as you’d expect for something shipped from somewhere random in the Southern hemisphere at the end of their season. The beetroot were mixed – some giant and woody, some good. The broad beans were very fresh but big and rather floury. The chard was giant but tasty and fresh. The green cabbage was huge but good, sweet and fresh. The lettuce was fine but wilted quickly and was therefore too large, lots got wasted. The Jersey Royals were fine but quite large so end of very first crop and average taste wise. Melon, ripe and smelled lovely but taste was bit watery. Nectarines were rock hard on arrival then suddenly ripened and started to go off; tasted good at their peak. Spring onions were fine. I got the impression the standard box is the place for A&C to use up gluts that are near end of shelf life. There is no option to rummage like you might in a shop (and I include supermarkets here) or market for the best items or the cheapest or whatever floats your boat and budget.

I compared the prices on Ocado for the closet choice I could get to the box contents. I thought I’d give them a chance and I also imagined that competition wise Ocado might be a closer match than Lidl. The standard box at standard price was cheaper than Ocado (I’m ignoring delivery here just looking at produce) by several pounds, which is good but at least what I would have expected. But if you start to substitute in the box – or if you’d built it yourself then Ocado would be a few pence cheaper. Not so good.

Its clearly better produce than some options but the lack of choice for the standard offering (or the prices if you pick freely) mean that overall its probably marginally worse than something like Ocado and definitely less value than the farm shop or some of the supermarkets.

At the end of the day it depends on a balance of convenience and price. If you don’t have easy access to transport then a delivery service is great and is certainly a way to buy non-food basics even if you can get to local shops easily. But as soon as you have a choice of local shops, good farm shops or even a decent supermarket and you can get to them easily then the convenience starts to lose out over the ability to pick the items you want, see what you are getting, and at what price, and not suddenly wonder what to do with a giant lettuce that’s fading fast.

So for me my initial reluctance to sign up myself has mainly been born out – I just want to see what I’m getting before I buy my fruit and veg. But that’s me and so I can’t quite see where A&C might fit in to how I shop for food. But remember readers this is just my opinion it might work for you.

For the record I normally shop at the following places (in no particular order):

Ocado for boring basics such as cat food and kitchen roll and a few other regular things that are sufficiently uniform it doesn’t matter like butter or yoghurt or pasta. But if they substitute it almost always goes back.
Waitrose (two branches in London) for slightly less basics plus veg and meat when I can’t get to the farm shops I like. Plus wine and beer.
Several farm shops in Essex and Suffolk where I stock up on my favourite produce when I’m nearby for meat, deli products and veg.
And the occasional foray to specialist shops and markets such as Borough and Neals Yard.

Here’s some other reviews:

7 thoughts on “Boxed in”